Remember to vote for Boot Hill Heroes on Steam Greenlight! Every vote helps get this game finally released! 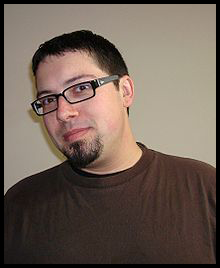 Jake ‘Virt’ Kaufman is the “lead audio guy” for WayForward Technologies as well as a freelance video game composer who has worked on over 70 titles, including the Shantae series, Contra 4, BloodRayne: Betrayal, and Red Faction: Guerilla.  He is an active member of the Overclocked Remix community and a founding member of VGMi.  Jake lives with his wife Kristi and their puggle Nugget in northern Los Angeles.

How did you get started in video game music composition?

I started playing piano before I could read, and grew up as a hobbyist, writing original songs and fan arrangements of Mega Man, Zelda, and various Konami NES soundtracks, using portable keyboards and an ancient computer with MIDI software. Eventually my parents bought me a modem, and I discovered that I was not alone in my weird hobby; After finding the PC Demo Scene and Overclocked Remix in my teenage years, I started sharing my work with others, and composition was a natural career choice, since I suck at almost everything else and have no education.

What are some other game soundtracks you have worked on?

Contra IV (DS), Double Dragon Neon (XBLA/PSN), Batman: The Brave and the Bold (Wii/DS), DuckTales: Remastered (consoles/PC) the entire Shantae series from Game Boy Color to modern consoles, both Adventure Time console games, Regular Show: Mordecai and Rigby in 8-bit Land (3DS), Shovel Knight, Retro City Rampage, and even some unexpected arrangement work for the Japanese market, such as Dodonpachi Daifukkatsu: Black Label. About 70 games at this point, but those are the cooler ones. 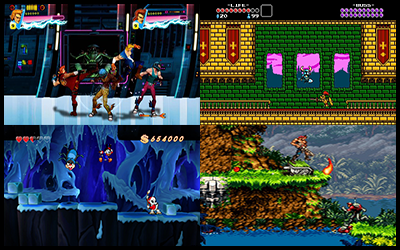 Who are your favorite composers and who has had the most influence on your work?

Special mention should be made of George Sanger, a.k.a. The Fat Man (7th Guest), who has been a mentor throughout my career, and is probably the coolest person I’ve ever met. My influences vary drastically depending on what I’m writing, generally “whoever is best at whatever I’m currently trying to rip off”

If you could compose for any game franchise, what would it be?

Castlevania, without a doubt. If you want to hear what it would sound like, listen to Bloodrayne: Betrayal.

If you could recompose the soundtrack for any past game, what would it be?

I don’t know that I’d recompose anyone else’s work, but I’d kill to go back in time and collaborate with Peter McConnell on Grim Fandango or Psychonauts.

What do you think the biggest difference between composing music for a game as opposed to a film or television show?

Nonlinearity. The idea that, outside of cutscenes, you can’t count on anything being a fixed duration — the music has to be appropriate without being annoyingly repetitive, and in many cases has to dynamically react to the player’s actions.

Can you tell us about any projects you have planned for the future?

To coincide with the Steam release of Double Dragon Neon, I’m planning to write full-length versions of ALL of the “mix-tape” bonus tracks, which currently exist only as 10-second loops in various 80s styles. I’m waiting on the publisher for official approval / studio budget, but I intend to do it either way, for kicks. Also, I’m collaborating with the magical Jessie Seely, who sang on “Mango Tango – Neon Jungle”, on a full-length original album featuring a virtual band. I’m so excited I can hardly stand it. I think I just peed a little.

If you weren’t composing music, what other job would you like to have in the video games industry?

Technical / effects art. You know, the folks who make all the particle explosions, magic spells, light trails, user interface “sizzles”. It’s a lot like sound design — flashy things that add a ton of polish to the game, and which most people hardly even notice unless they’re missing or bad. I also program as a hobby, and am working on a few indie game projects of my own, including an Out Run style racing game, and a dodge ball roguelike-like with randomized characters, permadeath and super-throws!

Other than music, do you have any other super powers?

I am horribly awkward around humans, but I have an uncanny kinship with dogs of all shapes and sizes. It might be my unique bacon-scented skin oils, or the fact that I give unbelievably satisfying butt rubs, but I’m like the pied piper of canines.

What’s one secret you want to share about yourself that no one else knows?

It’s more likely than not that I will someday scale back on video game work to write albums with huge lush vocal harmonies, like Queen or the Beach Boys. I believe I’m better at it than I am at game music, and it’s the only time I actually feel confident. I’ll probably always work on indie stuff as a hobby, but I feel like vocal work is my true calling (not as a singer, but as a writer / lyricist). I’d love to write a full musical. 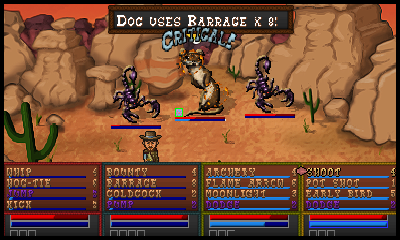 What originally caused you to be interested in composing for Boot Hill Heroes?

I met this awesome dude, Giovanni, who had backed the Kickstarter campaign, and informed me that you were seeking a composer; I checked out the game and immediately fell in love. My initial thought was “Whoa, I’m WAY out of my element” — Although I’m a giant RPG fan, I’d never written a full soundtrack for one, and especially never in this particular style. But I tend to see challenges outside of my comfort zone and want to jump right in, sink or swim. Luckily, I was able to bluff and bluster my way into the job, and my only regret is that I only got to write ~40 tracks and not 300.

Take us through the process of composing a track for Boot Hill Heroes.

I did a lot of work on the Game Boy Advance and DS; the ability to make ridiculously tiny and highly optimized instrument banks (a 30-piece drum kit in 10 kilobytes, for example) is almost totally obsolete as a professional skill — but it sure came in handy here! Targeting the specs of the Super NES hardware, I limited myself to 64 KB of samples per song (for perspective, the sample libraries I use every day are in the hundreds of gigabytes) with only 8 voices (to illustrate: if you played a big chord with both hands on a piano, you couldn’t use your thumbs, and before you could hit another key, you’d have to release one of the existing ones first) and no special effects other than the rudimentary SNES echo / reverb. The descriptions, reference materials, and creative direction were far beyond what I usually get, especially from first-time developers, so I went right in with a clear idea of what each scene or character theme needed to sound like.

On a related note, do you have any composing rituals?  Lucky charms?  Beverages? Or anything like that?

Just a brief period of quiet meditation to clear my mind and shut off the outside world. I imagine I’m flipping the switch on a radio, and I just tune the dial to whatever station contains the kind of music I want to write — then I listen to what’s in my head, and transcribe it as quickly and accurately as possible. Once it’s written out, it usually sounds awful, so I get to work adding stuff, removing stuff, and massaging it into something less awful.

How would you describe the influence and style of the music of Boot Hill Heroes?

I listened to a LOT of Ennio Morricone and Luis Bacalov (beyond just the reference tracks) for inspiration, and the music of Final Fantasy and Earthbound are already etched into my brain, so I tried to write songs that combined both influences. For battle themes and other upbeat stuff, I drew from one of my most beloved arcade games, Sunset Riders, featuring an amazing “Wild West filtered through Japanese VGM” pastiche. Generally, I tried to be as fun and playful as I could, so that the serious moments would have some weight to them. Whether I succeeded or failed is up to the player, but that was my goal. 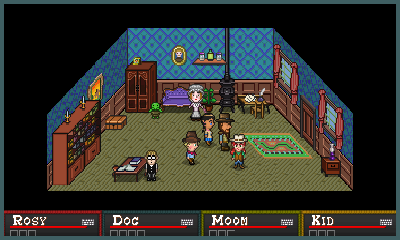 What has been the most fun track to compose for Boot Hill Heroes?

The manic battle themes were closest to “second nature” for me, but the somber or emotional pieces were the biggest challenge, and I consider that to be the most rewarding part of the job. I loved working on The Saloon Rag for the same reason; A lot of my piano practice includes Joplin and Jelly Roll, and that is SERIOUSLY intimidating stuff, so the chance to attempt an authentic rag was awesome and terrifying. I tried to take it in stride.

What has been the most difficult track to compose for Boot Hill Heroes?

Anything with heavy orchestration, such as “Last Stand” or “Sad Times”. Writing lush-sounding stuff under these kinds of limitations is more or less a game of Tetris, you have to cut a lot out and be economical with harmony and counterpoint. Low polyphony, from Bach all the way up to Mitsuda, is truly a mind-bending concept. That’s most of why I love chiptune music so much. My natural inclination is to stack on layer after layer until I have a wall of sound, and that just isn’t possible here. Man, it was fun.

What track are you most proud of for Boot Hill Heroes?

Probably the Saints-Little Gang’s main theme. I tried to capture the way the choir sort of goes at full blast in a lot of Morricone’s work, it’s super harsh-sounding and gives you a sense of crazy-eyed lawless danger. It’s like they’re yelling out notes.

If you could tell someone who listens to the music in Boot Hill Heroes to try to listen for specifically?   Such as interesting motifs or recurring themes?

I’m a sucker for leitmotif and use it heavily in almost everything I do, so there are about 6 different themes that pop up in various places. But most of all, I used the harmonica in a certain way which is a nod to the “weeeeeee, boop beeeeeep, berp bweeeeep weeee bwoooeeee weeeoooo” alien motif that you hear all over the Earthbound soundtrack. It’s not nearly as obvious as that, but it’s in there.

Where can people here a sample of the Boot Hill Heroes soundtrack now?  Why did you choose those tracks to make public?

I put up four tracks at https://soundcloud.com/virtjk/sets/boot-hill-heroes-music-teaser and chose them mainly for variety — a battle theme, the Saloon Rag, and a couple more emotional or “genre-themed” pieces. It was hard to pick favorites, but I tried to approach it as a “first impression” to give people an idea of what to expect. Haha, just kidding. I threw darts at a printout of the track list.

If you could be any character in Boot Hill Heroes, who would you choose to be?

I’d be Doc. There’s almost nothing about my past that is remotely mysterious, since I have no shame and will answer any question posed. So, as long as we’re role-playing…