Welcome back to the second week of the Corral Countdown where we talk about something new I want you to know about Boot Hill Bounties every week day, up until release. This also begins our first week of outside player testing as I continue to polish the pacing and difficulty as well as root out any last bugs.

Now if you’re new to the series, you may not know that Boot Hill Bounties actually continues the story started in Boot Hill Heroes. But I want players to know that playing the first game is NOT a prerequisite to enjoy Boot Hill Bounties. Great care has been made in designing an experience that gets new players caught up with the story and gameplay. And given the size and scope of Bounties, you could say Boot Hill Heroes mostly serves as a prelude to the saga.

But players who did complete Boot Hill Heroes surely want to know, what happens to all the money, items and skills they acquired in that game? Is there a way to import them into Boot Hill Bounties?

Now you won’t start with your old gear from the first second of gameplay. You’ll have to finish the prologue chapter, return home, and then you’ll get access to a chest with all your vittles. This will definitely give players a head start as they begin their new adventure. 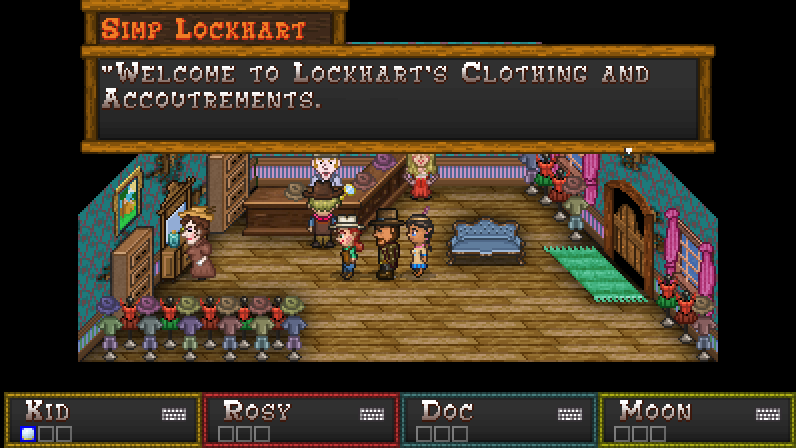 Items and gear are easy to import, but what about Vantages? As mentioned last week, Hats and Vantages function differently in Boot Hill Bounties. Hats previously did not gain levels, so I had to get creative in finding a way for that experience to translate.

If you don’t import a save file, the characters begin on Level 10 (so if you import a save file where your characters are less than level 10 you would be at a disadvantage!). Also, you can obtain every single hat that was available in Boot Hill Heroes, but you’ll have to buy them from Lockhart’s clothing.

Tomorrow we’ll be unveiling another new hat. This time, it’s a hat for Doc. Can you guess what it will be?