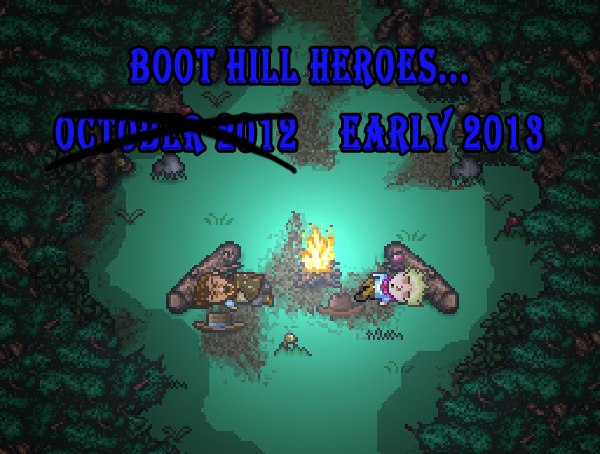 I’ve been dreading writing this post for a few weeks now, but it’s time for us to face the music:  Boot Hill Heroes has been delayed to early 2013.

We apologize to everyone who is disappointed by this news, especially our backers who were told the game would be released in October.

When it looked like we would not be able to finish the game by October, I had a discussion with Ben about we should do.  There were two choices:  diminish the ambition of the game and start cutting content and features, or delay the game.  Either way we would be disappointing people.  But we decided to choose the latter.  It’s important to us that we make Boot Hill Heroes every bit as good as we intended.

Nothing really, we just overestimated how far along we were and underestimated how much left there was to do.  There haven’t been any major hurtles or anything else slowing us down.  Progress is being made every day.  It’s exciting to wake up at the beginning of the day and think about working on this game, and it’s rewarding to look back at the end of the day and see how much progress was made.  Unfortunately, there just wasn’t enough time.

What about all that Kickstarter money?

As promised by our budget, this money doesn’t go to us to buy food or pay our rent.  It will all go back into the game. We’ve spent less than 10% of it so far.  It took us some time before we had a supplemental art team in place that we are now paying regularly.  The music is about 2/3 finished and paid for.  It’s composed by Jake Kaufman whose recent credits include “Double Dragon Neon,” “Retro City Rampage,” and “BloodRayne:  Betrayal.”  The music for Boot Hill Heroes is spectacular.  And it’s all thanks to our backers.

How far along is the game?

A better way to explain it is how quickly progress is being made now as opposed to six months ago.  When we started this game from scratch, it was days before we even had something appear on the screen.  But little by little, a foundation was created.  And with every step, there is new code, architecture, systems, graphics, etc.  Each subsequent step builds on the previous step.  So progress happens faster and faster, almost exponentially.  That slow drip of small advancements picks up in momentum and rapidly transforms into a whirling torrent of progress.  It’s exciting to be in the eye of the storm right now.

I made this silly graphic to illustrate our current perception of game development.  You can see where we were, where we are now, and where we should be in the next few months. 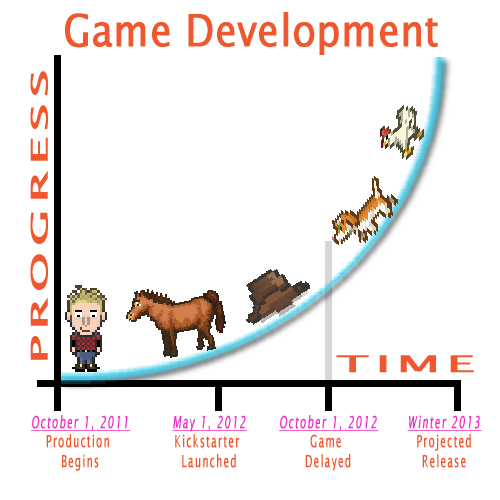 So when exactly will it be done?

I now know better than to try to predict this with precision.  Game development progress is wildly unpredictable.  That’s part of the fun, I guess.  We’re saying “Winter 2013” to keep a wide window open, but don’t be surprised if things come together sooner than that.

Welcome , today is Sunday, February 5, 2023
Home
Next Post: News and Highlights from the Indiecity Games Meeting
Previous Post: News, Interviews, and other Stuff!
Top of page
Bottom of page