Thank you for playing Boot Hill Bounties on Nintendo Switch! Unfortunately, a couple of bugs have come up on the version currently available on the eShop. These will all be addressed in the next patch scheduled to release May 30. 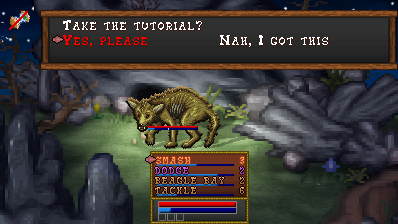 At the very start of the game, Doc asks if you’d like a combat tutorial. As one reviewer was keen to point out, if you press the ‘Cancel Button’ (B) instead of the ‘Confirm Button’ (A) then the tutorial will not continue and you’ll be unable to act. How unfortunate! 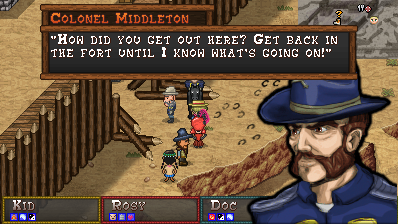 There is a sequence at Fort Chatahasee where the party must search for clues within the fort. You aren’t able to leave the walls of the fort at this point. At least, you’re not supposed to be able to. A player let me know that they did get outside the walls and were unable to get back inside! We still don’t know how they got outside the walls. But we’re going to address this by at least allowing you to go back inside the fort by speaking with Colonel Middleton here who will transport you back inside.

These are all the issues being addressed in the next patch. But if you found something else please let us know! Email me at dave@experimentalgamer.com.